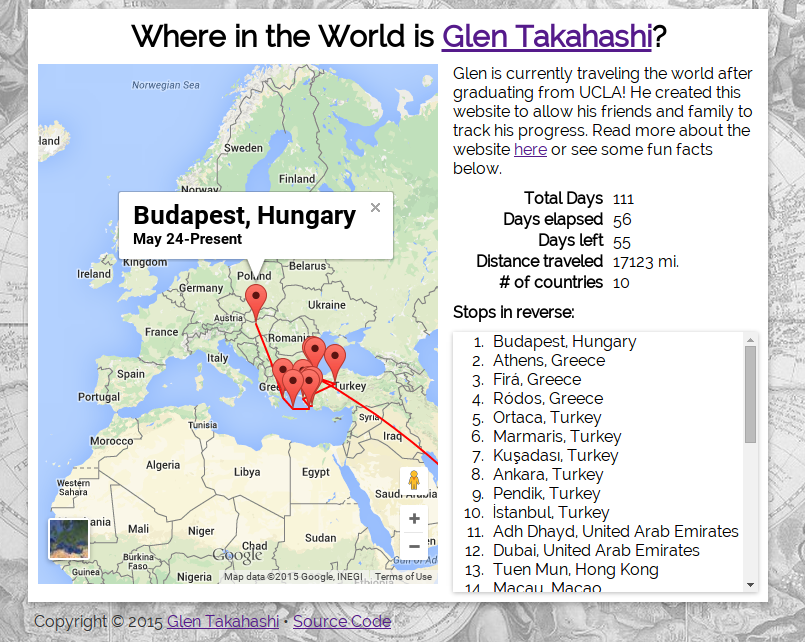 After graduating from UCLA in March 2015, I set off on a multi-month, unplanned journey around the world. At Palantir, I had the pleasure of working with a friend named Pulkit, who had done an unplanned road-trip around the US. He told me that his friends and family were always asking where he was on his trip so he created a website that allowed them to track where he was in real-time.

I thought this was a brilliant and useful idea, so naturally I wanted to do the same for my own trip. Unfortunately, because I was traveling internationally, my service was spotty and I didn’t have the luxury of being able to constantly charge my phone via a car charger. This meant that his open-source code and most other conventional methods of constant location reporting to a web service would be unpractical. Luckily, I found an alternative solution to economically get my location by using the already-active Google Location History tied to my phone.

I didn’t get the chance to start development until I was already on vacation, but once I found the free time to write some code, I held a mini-hackathon for myself to work on the project. It was exceptionally hot in Dubai so I hid in the Dubai Mall at a cafe while I was avoiding the 100+ degree weather outside. In the few hours I was there, I wrote some 11th-hour-hackathon-quality code, and ended up with a very basic prototype.

How it works is a node.js script running on an hourly basis that does 4 things.

In the end, I had a workable project that allowed me to automatically update my location. The code still needs work, but I’ll leave that task for when I get back from my travels. For now, you can see my trip history and source code below.