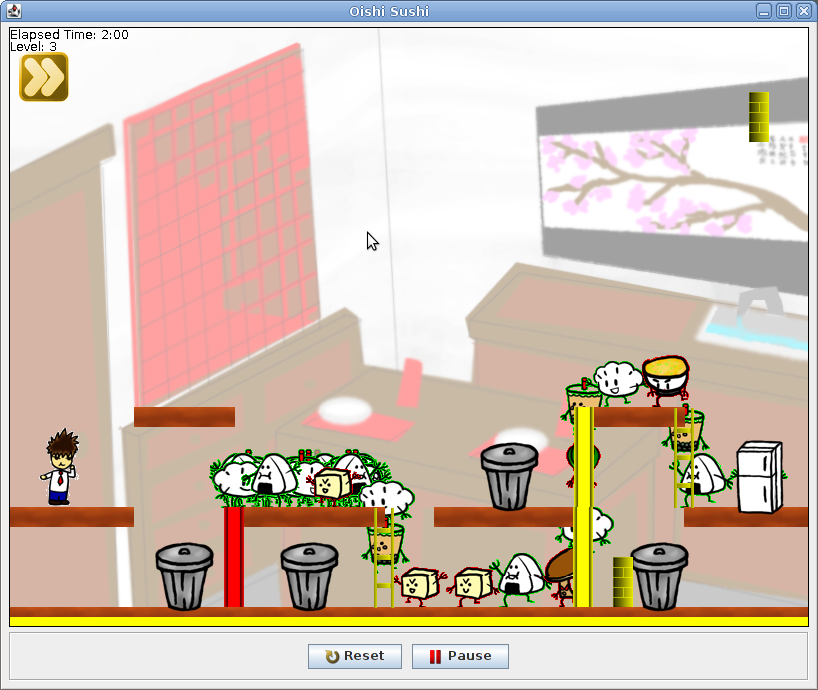 During Summer 2009 I participated in COSMOS, a science/tech camp, and had 4 weeks to create a video game from scratch. I was partnered up with someone else and we came up the idea for a puzzle game which we then developed in Java.

The basic story is that a young Japanese boy wants to become a sumo wrestler, but he is much too skinny. In order to gain weight, he decides to eat lots of hearty food and avoid lean food. Once he eats enough food, he grows large enough to be a professional sumo wrestler. Luckily for him, in his world food walks around aimlessly and infinitely and at no cost!

The gameplay is simple. It is a kind of platform-based puzzle game, but instead of feeding the boy food, you place objects to dictate how food will move around the level. Food continuously spawns from a fridge, and the goal is to get it to the boy while avoiding trash cans which destroy the food. There are three different ways to control food: chutes, ladders, and walls. Chutes cause food of the same color type to move down a platform edge, ladders cause them to move up, and walls cause them to change direction. These objects come in colors, and if the food doesn’t match the color, nothing at all will happen and it will pass right through.

If you want to give the game a try, you can download the runnable jar.

The source code is available online at https://github.com/glentakahashi/oishi-sushi